If you want to see a building of surprising architecture and color in what could fairly be called “the middle of nowhere,” you should plan to visit the Antelope Valley Indian Museum State Historic Park, in Lancaster. It would take you just under an hour and a half to drive from downtown Los Angeles, but it will feel as if you are much further away.

The structure (which looks like a Tudor house, or perhaps an Alpine chalet) was first built in 1928 by H. Arden Edwards, who was an admirer of the art and craft of the native peoples that once lived and traveled through the area. In a way that he probably couldn’t do nowadays, he built the structure over a rock. The house not only accommodated his family but also served as a museum to display all the artifacts that he had collected. When you visit, you will climb over part of the rock to see his collection, which has been kept the way he set it up almost 90 years ago. Some of those artifacts, we now know, were sacred to the original owners, and so today they have notes that explain it, next to the original notes (sometimes politically incorrect ones) of the collector.

By 1940, Grace Wilcox Oliver had purchased the home, had built an addition to it, and in the new area had set up her own exhibit of Indian artifacts. Her artifacts are still there, just as she originally organized them. Up to the 1970s she ran the place as a museum, but in 1979 she sold it to the State of California so that the land could become a State Park, and she donated the entire collection of artifacts.

Perhaps the most interesting part of visiting this museum is to see the progression in the understanding and respect that we have gained towards Native American property throughout the years. People would never be able to get a hold of and to keep artifacts nowadays they way that they could almost a century ago.

The museum is interesting and the surrounding area – Piute Butte – is beautiful. Behind the museum there is a ½ mile-long self-guided trail, from which you can admire the rocks, the plants, and the occasional wild animal. There are number markings through the length of the trail so that you will stop to read the corresponding explanation in the tour brochure. This is an easy hike, every kid should be able to walk it, and it provides the most beautiful sights not only of the butte, but also of the back of the San Gabriel Mountains.

There are picnic tables, so you can bring a lunch. Just know that they do not sell anything on the premises, so you need to have everything you’ll need with you. Flushable bathrooms are available. In the summer it is hot (about 96 degrees right now in July), so be prepared with water and sunblock.

Once upon a time, people could walk up to the rocks, but that eroded the Indian rock art (plus in some cases people added their own “art” to them), so now it is requested that you stay on the trail. Still, you can expect to take gorgeous pictures.

You must visit on a Saturday or a Sunday between 11 am and 4 pm. There is an admission charge of $3 per adult. Kids 12 and under are free.

This day trip could be combined with a visit to the Vasquez Rocks Natural area and/or a visit to Red Rock Canyon State Park. If visiting during spring time, combine it also with a stop at the Antelope Valley California Poppy Reserve.

Indian Rice Grass – Native Americans would make a flower out of the seeds in this plant. 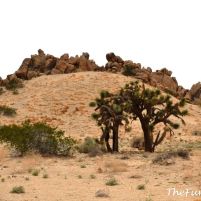 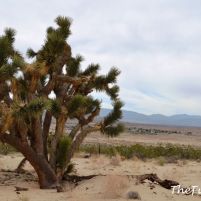 The view of the San Gabriel Mountains 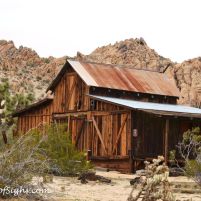 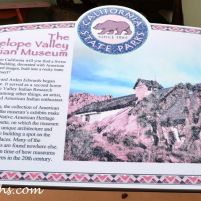